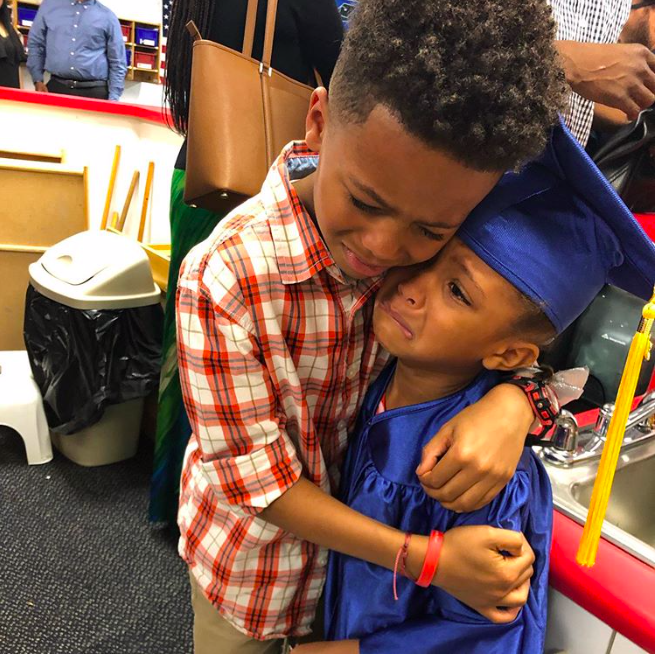 A Connecticut mother’s Instagram post, which captured a heartwarming moment between her young son and even younger daughter, has gone viral.

Last Saturday, Aundrea Smith shared a photo of her 8-year-old son Derek hugging his 5-year-old sister Charlee, who had just graduated from pre-kindergarten. As the two siblings embrace, they both shed a few tears in what was clearly an overwhelming, emotional moment for them.

“Today my daughter graduated from Pre-K,” Smith’s post reads. “After the ceremony my son walked up to her and gave her a hug. ‘I’m just so proud of you’ he said. Then of course my daughter started crying. As we wiped away our tears, my husband asked her, ‘Pumpkin, why are you crying?’ She responded, ‘I’m just so happy.’ We are so blessed.”

In an interview with Today, Smith said Charlee looks up to her older brother.

“She admires him so much,” the proud mother explained. “At home, she follows him around, wants to do everything he does.”

As of Wednesday, Smith’s post has been liked almost 20,000 times. It has also been flooded with comments, many of which have praised the two children for showing their raw emotions and, more importantly, love for each other.

“This picture sums up everything you hope as a parent!” one person wrote. “In this picture I can tell what kind of parents you are and what type of wonderful children you are raising! When you doubt if you are doing the ‘right thing’ as many of us parents do …. look at this picture and smile knowing you are doing amazing !!!”

“I love this,” another wrote. “You little ones have given so much happiness to loads of people.”