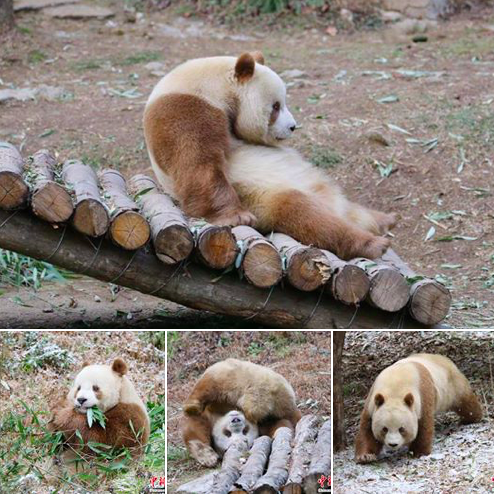 When most people imagine a panda, they instantly envision an adorably fluffy, black and white bear — but this very special animal named Qizai will defy preconceived notions.

The gentle giant is thought to be one of the only known brown and white pandas in history.

The Daily Mail reports that Qizai was just a young cub when he was spotted by researchers, wandering alone, in the Qinling Mountains in central China.

The team took him back to a nearby wildlife rescue to make sure he was given medical treatment and adequate food.

Qizai is now a happy and healthy seven-year-old bear.

Pandas International reports that only a handful of the rare bears have been spotted in the remote Qinling region of China over the last 30 years.

Scientists are still not sure why pandas from this region sometimes display such unique coloring, but have speculated that genetic and environmental factors may play a role.

His keeper, He Xin, spends up to 18 hours a day with the adorable bear.

“He is slower than the other pandas, but he is also cuter,” He Xin told The Daily Mail.

And we couldn’t agree more with that statement!

Is this girl the ‘most beautiful in the world?’