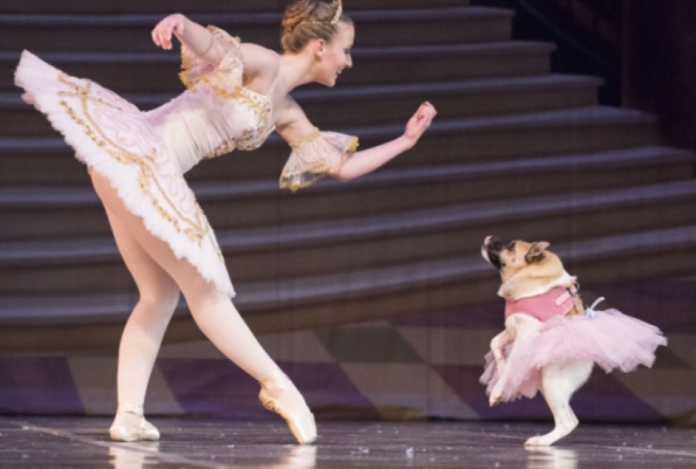 This short-spined border collie mix may be classified as a disabled dog, but no other pup can pirouette quite like she can.

Meet Pig, the short-spined ballerina with a feature role as the Sugar Plum Fairy’s on-stage companion during the Birmingham Ballet’s “Mutt-Cracker”.

“We love having her in the show. She was perfect for the [role],” said Cindy Free, director of the Birmingham Ballet. “She’s a petite, dainty package of joy.”

Pig, the 3-year-old border collie, can be seen in footage by APTN sporting a pink tutu as she dances on stage next to the Sugar Plum Fairy, working her hunched back — a result of her short-spine syndrome — to her advantage.

She is one of only seven dogs with short spine syndrome.

“She has been working on her pirouettes since last year, and she’s gotten them pretty well,” Free said, “especially if you offer her bacon-chicken strips.”

She said the Birmingham Ballet decided to start their annual Nutcracker run with a “Mutt-Cracker” opener five years ago, after she was inspired by a ballerina dancing with her dog.

“I said, ‘That looks fun,’ because I do love dogs,” Free said. “People were putting dogs in the opening scene like they’re taking them for a walk, [so] we auditioned dogs.”

Their first production of “Mutt-Cracker” featured 17 dogs with unique talents, including jumping through hoops, or dancing on hind legs.

The Birmingham Ballet’s opening night has since grown to include 29 dogs. A portion of every ticket for “Mutt-Cracker” goes to the Greater Birmingham Humane Society.