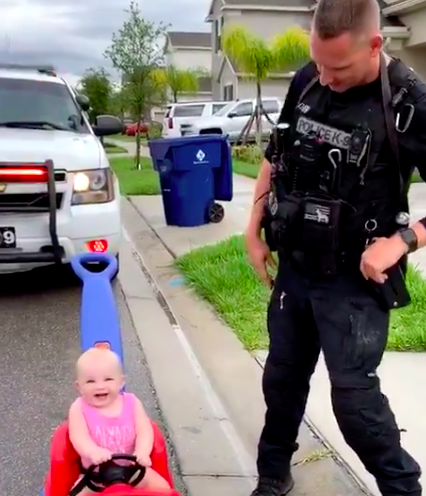 Can one exercise the right to remain silent if they haven’t yet learned how to speak?

That’s the dilemma one 10-month-old girl faced after she was playfully pulled over by her policeman father.

Alex Kipp, an officer with the Orlando Police Department, was returning home from work Tuesday when he spotted his baby daughter, Talynn, driving the wrong way down the road in her toy car.

Realizing the nature of the very adorable crime, Kipp put his lights on and pulled the juvenile offender over.

“License, registration and proof of insurance,” the officer requests in a now viral video.

After Talynn giggles at her father’s demand, he reassures her that he very much means business.

“I don’t believe this is a laughing matter, ma’am,” Kipp tells the beaming baby.

Thankfully, since Talynn was a first-time offender, her dad let her off with just a warning.